Thanks to Ox in a Box for recently visiting us at The Thatch. During their visit Katherine MacAlister caught up with Head chef James Durrant.

James has come full circle, having returned to The Thatch in Thame to run the kitchens, five years after working there as a sous chef.

“I was a junior sous chef when I started at The Thatch in spring 2014 and was head chef here fleetingly before I was asked to move to The Fishes, Oxford, in the autumn of 2016 to run their kitchen. I then helped Peach launch The Bear & Ragged Staff in Cumnor.”

But on discovering he and his wife Fern and discovered were going to be parents, he was keen to work a bit closer to home.

“When an opportunity came up to go back to The Thatch as head chef, I jumped at it,” the 28 year-old said.

Having won an Acorn Award last summer after being named one of the hospitality industry’s brightest young prospects, James is now busy in the kitchen working on new dishes for autumn and making the most of the season’s produce, including great game, fish and seafood.

“Any head chef wants to make the kitchen his own and do things better than before, and I’ve been lucky that a couple of chefs I worked with in the past wanted to work with me again.

“We’ve all had our heads down for the last few months working on new dishes and I’m pleased that the hard work is paying off.”

So how does that fit in with being a new father? “Our son Charlie was born in November and he’s a lovely little boy.

“We’re fortunate that we have our own little family now as well as Dylan, our four year old beagle.

“ I love being a dad and it’s all gone pretty well so far. Peach have been very supportive of me as a new dad and I suppose I’ve also been stricter with myself than before.

“I work a maximum of eight shifts a week and am home for three nights a week.

“I’ve worked with my boss Frazer (Sutherland) for a while now and we know each other well; he trusts me to get the work done, and to a high standard, and have a life. I do think the industry is changing now and that it’s getting easier to have a balance, which is a really good thing.

It does mean however that James now does a lot of experimenting, and planning the nw menus at home: “I’ve got three different smokers at home and like to experiment with hot smoked food, slow cooking and BBQ dishes. I’ve also started my own sourdough cultures and make lots of bread. 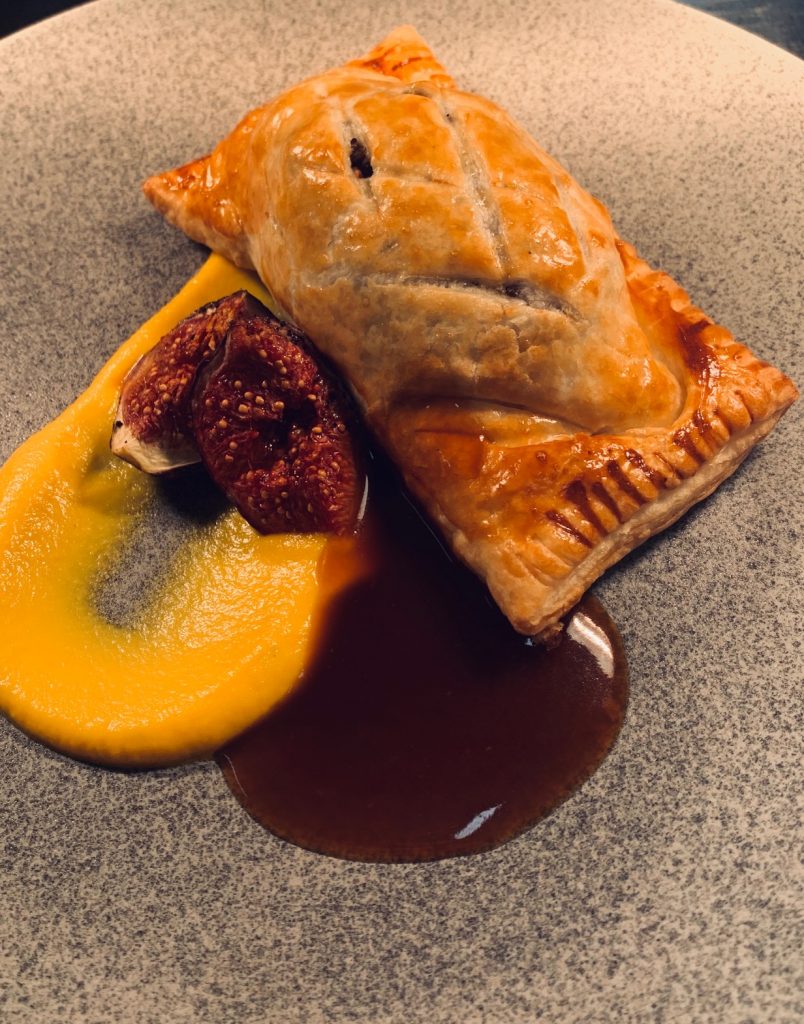 “We now change the menus every month at The Thatch, and that does give us more scope to try out something new.

“For instance, we have pan-fried gurnard and whole roast partridge on at the moment, and faggots in onion gravy on our fixed price menu. We still do fish and chips and roast chicken, but it’s great to be able to be a bit braver and a bit different, which our customers seem to like too.

But let’s go back to his purely Oxfordshire career; having started out as a waiter at The Angel, Long Crendon aged 17, he then qualified at Oxford and Cherwell Valley College, worked at The Mole Inn, Toot Baldon, a 2 Rosette, Bib Gourmande restaurant, impressing chef proprietor Gary Witchalls with the high standard of his cooking.

Keen to take on a more senior role, James moved to The Thatch in Thame as junior sous chef in the spring of 2014. Here, he took control of the entire kitchen team within three years, helping the pub to win several awards.

James then became head chef of sister pub The Fishes in North Hinksey, Oxford, setting up an outdoor kitchen to cook a new garden menu before moving to The Bear & Ragged Staff in Cumnor when Peach acquired it last spring.

So how does James feel about returning to Thame? “It’s where I call home. I’m glad I stayed put in a place I really like. Thame is a fantastic town with some great shops, especially for food and drink, and independent businesses.

If you want to sample James’ food for yourself then get down to That Thatch where game is big on the menu. So why does he love it so much?

One of the reasons is that, because it’s so seasonal, I’m able to speak to Aubrey Allen our game supplier to see what’s good right now, buy it and create my dishes around it.

“That stretches me as a chef and keeps it interesting, for guests too. It’s also just great to get my hands on seasonal British produce of such a fantastic quality.

To find out more about our opportunities at Peach, visit our join us page or email natalie.cash@peachpubs.com.

Making Life Peachy
Peach Pubs and its partners use cookies and similar technology to collect and analyse information about the users of this website. We use this information to enhance the content, campaigns and other services available on the site. Please click 'I accept' to consent to the use of this technology by Peach Pubs and its partners.
Manage Cookie Consent
We use cookies to optimize our website and our service.
Manage options Manage services Manage vendors Read more about these purposes
Preferences
{title} {title} {title}